Two RCMP officers based in Watson Lake, Yukon, have been charged with sexual assault following an attack on a woman earlier this week, the police force said Wednesday.

A woman told police she was sexually assaulted by two off-duty officers early Sunday morning in the southern Yukon town of 850, an RCMP spokesman told CBC News on Wednesday.

Both officers were suspended with pay. Police say they will not release the officers' names until they make their first court appearance on April 6.

The RCMP's major crimes unit has led the investigation that resulted in the charges, but Sgt. Mark Groves said Edmonton police are also being brought in to watch over the investigators.

"The RCMP will do everything possible to ensure that the public, everyone in the Yukon, feel they can trust the RCMP as Canada's national police force, and come to us for anything," Groves said.

Also monitoring the investigation is the Commission for Public Complaints Against the RCMP, an independent national police watchdog.

It announced earlier Wednesday that it is sending an observer to the Yukon to monitor the investigation and ensure it's conducted in an impartial manner.

"It's obvious people are going to be very concerned," said Kevin Brosseau, the commission's senior director of operations.

"It's a small town … [and] like any other small town, [it's] very concerned about the actions of the police, and to ensure that these very serious allegations are being appropriately investigated."

Brosseau said the commission's observer, a former senior Vancouver police official, will determine the relationship between the RCMP investigators and the two officers who have been charged, making sure there is no conflict of interest.

Brosseau added that the observer will also want make sure the accused officers are being treated the same as any other person would be.

In addition to the major crimes unit investigation, the RCMP is also looking into whether the Watson Lake officers breached the police force's code of conduct.

Posted by Mediawatch at 5:19 PM No comments: 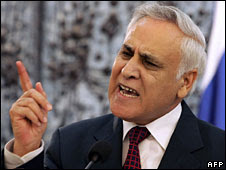 Mr Katsav was replaced as president by Shimon Peres.
Posted by Mediawatch at 9:30 PM No comments:

Habitually dressed in a long black abaya, with a veil placed firmly against her cheek, Shaikha Sabeeka bint Ibrahim Al Khalifa, the wife of the king of Bahrain, does not conform to the usual image of a political activist. Neither does Suzanne Mubarak, the demure, whippet-thin wife of Egypt's long-standing leader, Hosni Mubarak.

Yet last week, at a trail-blazing international conference in Bahrain, both these women delivered a stark message that polite Arab society never wanted to hear. Mubarak and Sabeeka warned of the blight of "sexual slavery", "trafficking", "child exploitation", "prostitution" and "rape" in the Middle East. As they spoke, the front row of robed and mostly bearded men listened in rapt silence. Once they had finished, there was a standing ovation. The two first ladies had not only broken the veil of silence on the human trafficking trade, they had coerced and charmed the assembled crowd of regional politicians, businessmen, judges and tycoons into taking action, and, finally, they had opened the door to discussing another taboo.

"It's all about changing mindsets," says Mubarak matter-of-factly. "We have to break barriers, we have to break a lot of things that we have been silent about. We have to work across so many different levels of taboos. And we are, you know. Subtly and quietly we are changing a lot."

It is nearly seven years since Mubarak set up the Arab Women Organisation, a body founded with the express purpose of empowering women in a part of the world where entrenched tribal and religious codes would seem to defy that aim. Since that time, the role and profile of the First Ladies of the Arab world has become one of the most intriguing developments in societies not known for their commitment to feminist agendas.

Few in the west have heard of the group. But out of 22 Arab countries, the first ladies of 15 - Jordan, the Emirates, Bahrain, Tunisia, Algeria, Sudan, Syria, Oman, Palestine, Lebanon, Libya, Egypt, Mauritania, Morocco and Yemen - have signed up. And, there are "tremendous hopes" that others will enrol.

"Some of the more traditional societies have not joined and these are the ones we are trying to get on board," Mubarak told the Observer. "People could think, 'Ah, first ladies, what can they do?' But all of us share the same culture, the same language and very similar problems. And we're aware of the needs of society, we know what we're talking about, and we're in a position to be role models."

And do they, I ask, talk of such things with their husbands? "Of course we do, because they are issues that affect the whole of society," she says. "These women are pushing the envelope. They're talking about politically sensitive issues and bringing on board an army of different players to address them," said Zohreh Tabatabai communications director at the Geneva-based International Labour Organisation.

The rise of the first ladies has been mirrored by the recent headway women have made across the Arab world. Even in the conservative oil-rich Gulf, girls are making headway. In countries like Bahrain, where women were given the vote only seven years ago, females now outnumber men in holding degrees.

"Admitting to your problems is the first step to solving them," says Sabeeka, revealing immaculately coiffed, thick hennaed hair as she allows her veil to drop around her shoulders. "The image of Arab women in the west, that we are just princesses in a golden cage, with no rights, no choice, no brains and no education, is a challenge. It's totally wrong and I really want to correct it."

Mild-mannered, progressive and with an impressive command of English, the 60-year-old royal, the first of King Hamad's four wives, is the antithesis of what Bahrainis have ever known. Until her husband took power in 2002, nobody in Bahrain had actually heard of a first lady, much less seen her. But emboldened by Mubarak and other first ladies who have tackled subjects that have long lain dormant on government agendas - starting with divorce and genital mutilation - Sabeeka has forged ahead with critical reforms in her position as head of the newly-established Supreme Council for Women.

As in other states, the policies have challenged the ossified Arab system, surprising diplomats who speak of the "phenomenon" of first ladies who now push ahead with social policies in a way their autocratic husbands never would.

"We're way behind the curve in grasping what is emerging in the Middle East in terms of female power, and we underestimate the results that these women leaders are achieving," says Dr Scilla Elworthy, a leading authority in conflict prevention whose Oxford Research Group has been nominated for the Nobel Price three times: "It's taken them some time to gain traction but they're producing model legislation and ensuring it is implemented. They've gone from chastity belts to contraception in 10 years - it took us 800 years to do that."

Egypt's status in the Arab world has inevitably helped Mubarak, at 68 widely seen as the doyenne of the first ladies.

"Suzanne Mubarak has been at the forefront of women's empowerment in the region for years," said one western official. "She is fiercely independent and gets things done. Her husband may be one thing but she is another and we are watching her closely."

But it is also Mubarak's immense powers of persuasion that, in concentrating minds, have helped break the mould. Eloquent in a way that her husband isn't, her mother was Welsh and fluency in English is another asset in her diplomatic efforts. "I still have cousins [in Britain]," she says. "I am comfortable in both cultures, in both languages, in both worlds, and that helps. And that's what I would like for the Arab world, for children from a very early age, to start appreciating other cultures to start understanding there is richness in our diversity. Yes, there is a movement of Islamic conservatism and it is on the rise. But women have earned rights and it is now up to them to defend them."

Posted by Mediawatch at 9:11 PM No comments: