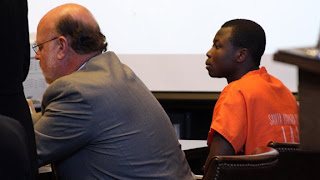 This article discusses the story of a man who was convicted with and sentenced to 6 years in a California state prison for raping a woman, both students at the time at University of California at Santa Barbara. This might be controversial, but the whole thing is just really, really interesting -- it's well-written and sheds some light on the hell both parties go though once the charges are filed; you might have to read a little deeper to find the survivor's, but it's there.
________

It's March 3, 2008, a brilliant day in Santa Barbara. But for Eric Frimpong, it feels like hell. He's in Superior Court, encircled by sheriff's deputies, making one more trip to the Department 2 courtroom. This is his last stop on the outside for a while, a painful reminder of how far he has fallen. He left his native Ghana in 2005 to play soccer for UC Santa Barbara; a year later he became a campus hero while leading the Gauchos to their first-ever national championship. If the immigrant experience can have a sound, Frimpong's sound was a raucous stadium. But in 2007, just weeks after being selected by the Kansas City Wizards in the MLS draft, he was accused of raping another student on the beach near his house. Now he's a convicted felon.

A victim's advocate reads a statement on behalf of the accuser, referred to in this story and in news coverage throughout the trial as Jane Doe. "I don't care that he's a soccer star…and I'm a nobody," the statement says. "Eric Frimpong ruined my life."

There's a rumble in the gallery. If his supporters could chime in now, they'd say that the kid in the prison garb has never spoken an unkind word or acted aggressively toward anyone. They would remind the court of the points made at trial: that his accuser was a woman with little memory of what happened that night because of a near-toxic blood alcohol level; that Frimpong's DNA wasn't found on the victim; that semen found on her underwear belonged to a jealous boyfriend, a white student who was never a suspect. They would argue that overzealous law enforcement was determined to nail a high-profile athlete, facts be damned, and that this was the Duke lacrosse case all over again -- except that the defendants in the Duke case were white men from affluent families with the means to navigate America's justice system, unlike Frimpong, who is poor and an immigrant.

Judge Brian Hill, citing Frimpong's clean record and "a lot of community support," delivers his sentence: six years in state prison. As Frimpong is led away, many people in the gallery are crying. Out in the hall, Paul and Loni Monahan stand solemnly while the courtroom empties. Their son, Pat, was Frimpong's teammate, and the Monahans -- a white, middle-class family -- had ­embraced "Frimmer" like a son and a brother. Loni distributes copies of a printed statement: "We will continue to fight for Eric. We will not rest until he is exonerated and the ugly truth of his wrongful prosecution and conviction comes out." When the leaflets are gone, she leans against a wall, tears flowing. "Eric believed in our system," she says. "He believed justice would prevail." Then she straightens. "Before I was sad," she says. "Now I'm mad."

Something good happened in Santa Barbara. Even now, as Frimpong sits behind a glass partition in the visitors' room of a California jail, he smiles easily while talking about where he's come from and what he has achieved. The way he sees it, he has always been fortunate.

Back in Ghana, in western Africa, he and his three younger siblings were raised by their mother, Mary, in the poor farming community of Abesin, but her job as a typist with the government forestry department allowed the family to have plumbing and electricity, unlike many of their neighbors. Eric was an engineering major and a midfielder for Kwame Nkrumah University of Science and Technology, in Kumasi, when he caught the eye of UCSB assistant Leo Chappel, who attended a 2005 match to scout the son of a Ghanian pro but ended up offering a scholarship to Frimpong instead. The first words out of Frimpong's mouth? Thank God. The next: What's UCSB?

By that August, the Gauchos had a crafty midfielder with intangibles to burn. Frimpong's intelligence, instinct and vision, along with his speed and touch, made him an on-the-ball force. He also had a winning personality. "Frimmer was very humble and considerate, on and off the field," says head coach Tim Vom Steeg.

As a senior the next year, the 5'6" Frimpong developed a reputation as a lockdown defender in leading the unseeded Big West champs to a string of improbable NCAA tournament wins. When the final whistle blew on the 2006 national championship game, the Cinderella Gauchos had defeated four-time king UCLA. Frimpong earned All-Big West honors, a spot in the MLS supplemental draft and the gratitude of his peers. "He was the heart and soul of the team," says Pat Monahan. "Eric won us that championship."

Everyone around Frimpong was buoyed by his success: his mother, friends and classmates, prominent locals who had helped him out along the way with invites to dinner, rides to the store and, when he struggled with homesickness during his junior year, a fund-raiser that yielded $3,000 for a ticket to Ghana. "We all tried to pitch in, because Eric's so darn likable," says Tim Foley, a booster who made Frimpong a regular guest at his family's home. "He was an American success story."

The Monahans were especially proud. Frimpong had met his "American parents" on move-in day in 2005, and they promptly invited him to spend Thanksgiving in San Diego. They gave him his first cell phone and laptop and took him on family vacations. They sat in their kitchen for hours listening to his stories about Ghana. They were also impressed by his knowledge of the Bible, and his quiet spirituality helped bolster their own faith. "He was going to graduate, play professionally, make more money here than he ever could in Ghana and bring it back to support his family," Loni says. "Eric really had it all."

Click here to read the rest.
Posted by Mediawatch at 4:03 PM No comments:

This is from an advice column that sex columnist/podcast host Dan Savage writes. The reader writes in about his partner's intimacy issues because, well, you can read it for yourself. We think Savage's response is straight-up outrageous. Is he always like this?

I have a problem with my happiness; he is a wonderful man who has a beauty that overwhelms me; we have a beautiful home; I am monogamous for the first time in a decade. But I just learned that I am the spitting image of a man in jail for raping my boyfriend.

He says he is not in a place to dig up his emotions about the subject and wants to hold off on sex—fine by me. I admire him and his courage to be with me despite my appearance. I still love him, but I feel like there is something I could do to help him, to help us. So I guess I am asking for suggestions.

If you have a stunt double out there rotting in jail somewhere for raping your Wonder Boyfriend, ANB [Asking Not Begging], then there are police reports and trial transcripts and a mug shot that looks just like you. Go find 'em.

I'm an asshole, of course, for casting doubt on your beautiful boyfriend's dramatic explanation for why his wonderfulness can't have sex with you right now—or ever, potentially, since he's "not in a place to dig up his emotions" and wants to "hold off" on sex. But cast I must, ANB, because one of two things is going on: Either your boyfriend is making this rape story up or he failed to share hugely pertinent info with you before moving in. Whichever it is, ANB, your boyfriend is at fault.

Why would he make it up? Well, it could be that he's not attracted to you, ANB, and manipulating you with a victim story allows him to reap the rewards of being with you while earning him a "Get Out of Fucking You Free" card.

If the story checks out—if you find that mug shot—then your boyfriend has my sympathies. But if he wasn't ready to resume his romantic and sexual life, ANB, he had no right to be out there dating anyone, least of all a man who looks exactly like his rapist. When we date, ANB, we're telling people that we're in a place where we're ready for love, romance, and sex. If we're not, we have no business dating anyone seriously. Period. At the very least, the onus was on him to disclose this information—his rape, your resemblance to his rapist—before moving in, not after.

And finally: If you're not having sex with your boyfriend, or anyone else, and there's no sex in your foreseeable future, ANB, that's not monogamy—that's celibacy.

Posted by Mediawatch at 3:56 PM No comments: