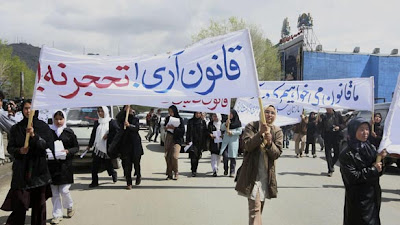 Afghan women protesting against a new law that severely undermines women's rights were pelted with stones in the country's capital Wednesday, say reports.

About 300 mostly young women gathered in Kabul to show their opposition to a recently passed law that forbids women from refusing to have sex with their husbands and requires them to get a male relative's permission to leave the house.

The demonstration, organized by women's rights activists in the country, occurred in front of a Shia mosque recently built by a cleric who helped craft the law. Critics of the law say it effectively legalizes rape within marriage and is a return to Taliban-style rule.

About 1,000 people opposed to the protest surrounded the women and threw gravel and small stones as police struggled to hold them back. The group of counter-protesters included both men and women. 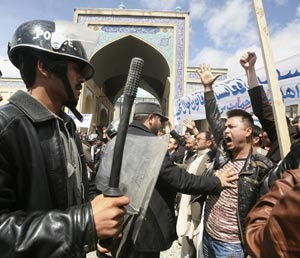 Some shouted "Death to the slaves of the Christians."

"You are a dog. You are not a Shia woman," one man shouted to a young woman in a headscarf holding aloft a banner that said, "We don't want Taliban law."

There were no reports of injuries.

Sima Ghani, a women's rights activist, said everyone at the protest is united against the law.

"No matter what religion we belong to, what sect we follow, we all stand against this law and want a reform of the law," she said.

Jeremy Starkey, a reporter with The Independent newspaper who was at the demonstration, said he saw men pelt the women with stones.

"I saw the men surging forward on a number of occasions," he said.

"Female afghan police officers joined hands to form a human chain around the women to try to protect them."

The law, which applies only to the minority Shia community, received widespread international condemnation.

The government of Afghan President Hamid Karzai has said the law will be reviewed and won't be implemented in its current form.

Canada's foreign affairs minister, Lawrence Cannon, said earlier this month Afghan officials had assured him they would delete "contentious clauses" from the legislation.

The Afghan constitution guarantees equal rights for women, but also allows the Shia to have separate family law based on religious tradition.

Posted by Mediawatch at 8:01 PM No comments:

While priming her political machine for a likely 2012 presidential primary run, Alaska Gov. Sarah Palin has fomented a scandal that threatens to further erode her reputation in the Last Frontier. In March, Palin nominated Wayne Anthony Ross for attorney general. Ross, a colorful far-right lawyer and longtime Palin ally who sports his initials, W.A.R., on his Hummer’s vanity plates, was once considered a shoo-in for confirmation. However, his nomination was thrown into grave peril when his opponents presented evidence that he called homosexuals “degenerates,” leveled invective against an African-American student offended by a statue of a Klansman, vowed to undermine the sovereignty of Native American tribes, and allegedly defended men who rape their wives. According to two sources close to the confirmation hearings, Palin may ask Ross to withdraw before his appointment comes to a vote.

Palin’s hopes for a swift confirmation process were dashed April 10 when Leah Burton, a veteran lobbyist on children’s issues and domestic violence, submitted a letter to the Alaska State Judiciary Committee claiming that Ross publicly defended spousal rape. According to Burton, who detailed the allegations for me, Ross allegedly declared during a speech before a 1991 gathering of the “father’s rights” group Dads Against Discrimination, “If a guy can’t rape his wife, who’s he gonna rape?” (In a subsequent letter, Ross denied the remark and claimed, “I don’t talk like that!”)

Burton said Ross’s statement was consistent with his overarching attitude toward women’s issues. She claimed that he once said during a debate on the Equal Rights Amendment, “If a woman would keep her mouth shut, there wouldn’t be an issue with domestic violence.” Burton also maintained she has been in touch with “a number” of domestic-violence victims who witnessed Ross make “horrible” statements, but are too intimidated to speak out. “Alaska is a very small state and it’s terrifying for these victims to come forward because they’re afraid of retribution,” Burton told me.

Read more.
Posted by Mediawatch at 2:11 AM No comments:

By Carlotta Gall and Sangar Rahimi

KABUL, AFGHANISTAN - President Hamid Karzai ordered a review on Saturday of a new law that has been criticized internationally for introducing Taliban-era restrictions on women and sanctioning marital rape. 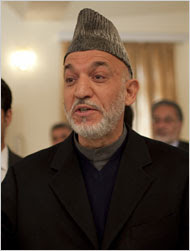 The president defended the law, which concerns family law for the Shiite minority, and said Western news media reports were misinformed. Nevertheless, he said his justice minister would review it and make amendments if the law was found to contravene the Constitution and the freedoms that it guarantees.

“The Western media have either mistranslated or taken incorrect information and then published it,” Mr. Karzai said at a news briefing in the presidential palace on Saturday. “If there is anything in contradiction with our Constitution or Shariah, or freedoms granted by the Constitution, we will take action in close consultation with the clerics of the country.”

If changes are needed, he said, the bill would be sent back to Parliament.

Human rights officials have criticized the law, in particular for the restrictions it places on when a woman can leave her house, and for stating the circumstances in which she has to have sex with her husband.

A Shiite woman would be allowed to leave home only “for a legitimate purpose,” which the law does not define. The law also says, “Unless the wife is ill, the wife is bound to give a positive response to the sexual desires of her husband.” Critics have said that provision legalizes marital rape.

The law also outlines rules on divorce, child custody and marriage, all in ways that discriminate against women, said Soraya Sobhrang, commissioner for women’s rights at the Afghan Independent Human Rights Commission.

While the law applies only to Shiites, who represent approximately 10 percent of the population, its passage could influence a proposed family law for the Sunni majority and a draft law on violence against women, Ms. Sobhrang said. “This opens the way for more discrimination,” she said.

Mr. Karzai signed the law last week after a vote in Parliament last month, Ms. Sobhrang said, adding that she had seen a copy of the law with his signature.

However, the presidential spokesman, Homayun Hamidzada, would not confirm that the president had signed the law and said only that the he was still reviewing it.

Mr. Karzai’s decision to review the law came after a storm of criticism in recent days. Canada called in the Afghan ambassador for an explanation, and NATO's secretary general questioned why the alliance was sending men and women to fight in Afghanistan when discrimination against women was condoned by law.

Asked about the law at a news conference in Strasbourg, France, on Saturday, President Obama called it “abhorrent.”

Also on Saturday, Italy’s defense minister said Italy was considering a temporary withdrawal of the women serving in its force in Afghanistan to protest the law, Reuters reported.

“For a new law in 2009 to target women in this way is extraordinary, reprehensible and reminiscent of the decrees made by the Taliban regime in Afghanistan in the 1990s,” Ms. Pillay said in a statement posted on her agency’s Web site. “This is another clear indication that the human rights situation in Afghanistan is getting worse, not better.”

In addition to the clauses on when women may leave the home and must submit to their husbands, Ms. Pillay said she was concerned about a section that forbids women from working or receiving education without their husband‘s permission.

Ms. Sobhrang, who has been working on the issue for the last two years, said women’s groups and the human rights commissions had worked with Parliament to introduce amendments but then the law was suddenly pushed through with only three amendments. The bill as originally drawn up by Shiite clerics barred a woman from leaving the house without her husband’s permission, she said. The parliamentary judicial commission amended that provision to say that a woman could leave the house “for a legitimate purpose.”

Mr. Karzai cited that provision in a news conference on Saturday, pointing out that the final version of the law did not ban a woman from leaving her house. But Ms. Sobhrang said even as amended the law contravened the Constitution, which recognizes equal rights for men and women. The term “for a legitimate purpose” was open to interpretation, she added.

She said Mr. Karzai had supported women’s rights in the past but seemed to have given that up in recent months. Some Western officials have speculated that he signed the law to win the support of conservative Shiite clerics in coming presidential elections.

Yet the leading cleric behind the Family Law, Sheik Muhammad Asif Mohseni, complained last week that he was dissatisfied with the amendments that Parliament had made to his original draft. Speaking on his own television channel, Tamadun Television, he objected to the introduction of a legal age for marriage, “16 for women and 18 for men,” saying that people should be able to decide for themselves.

Human rights officials consider raising the marriage age a critical step toward ending the common practice of forced marriages and the marriage of young girls.

Another amendment gave women longer custody of young children in the case of divorce. In the original draft, women could have custody of a son until he was 2 years old, and a daughter until she was 7. The amended version raises the ages to 7 for boys and 9 for girls.

Ms. Sobhrang criticized both versions for not taking into account the interests and desires of the children.

Posted by Mediawatch at 10:07 AM No comments:

This is an extremely controversial case and may set a precedent in future murder cases of this kind. MediaWatch posted a story several months ago on an HIV+ woman in Quebec charged with sexual assault for hiding her status from her partner. For a little background reading, see this story from 2008.
________________

An HIV-positive Ontario man has been found guilty of first-degree murder in the deaths of two of his sex partners in what was considered a precedent-setting trial in Canada.

Aziga, of Hamilton, had been accused of endangering the lives of 11 women by recklessly exposing them to the virus that causes AIDS.

The first-degree murder charges made this case the first of its kind in Canada.

In his instruction to jurors, Justice Thomas Lofchik said they need not find that Aziga planned and deliberately killed the two Toronto women for him to be found guilty of first-degree murder.

The deaths of S.B., 51, and H.C., 49, would automatically be first-degree murders if the jury found they were committed as the result of an aggravated sexual assault, Lofchik said.

During the six-month trial, the Crown described Aziga, a former employee of the Ministry of the Attorney General, as a callous and arrogant person who lied about his HIV status.

Prosecutors alleged that Aziga failed to tell his partners of his HIV-positive status, even though he had been aware of it since 1996 and was under public-health orders to do so.

The defence argued Aziga was depressed and ill and did not have the state of mind to deliberately endanger the lives of his sexual partners.

Posted by Mediawatch at 9:56 AM No comments: