To Have (as a Running Mate), and to Hold (Politely)

LEE’S SUMMIT, Mo. — For now, the rule is simple: Hug your running mate, kiss your wife. 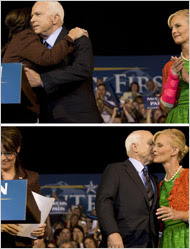 The Republican ticket of John McCain and Sarah Palin has raised questions about etiquette and body language. Above, Mr. McCain with Ms. Palin, left, and his wife, Cindy McCain.

When Geraldine A. Ferraro and Walter F. Mondale shared the Democratic presidential ticket in 1984, it was strictly “hands off.” 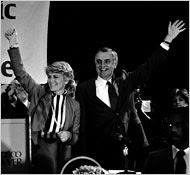 When Senator John McCain, the Republican presidential nominee, came out on stage to congratulate his running mate, Gov. Sarah Palin of Alaska, after her acceptance speech at the Republican National Convention in St. Paul last week, he gave her a hug, not a handshake. Ms. Palin got another hug at a rally here outside Kansas City on Monday.

The same McCain-Palin embrace — businesslike, to the point — was on display at a rally over the weekend in Colorado Springs, but this time Mr. McCain’s wife, Cindy, was on stage. Moving quickly after his clasp of his running mate, Mr. McCain took a short side-step and planted a peck on his wife’s cheek.

It has been nearly a quarter century since Walter F. Mondale almost never touched Geraldine A. Ferraro in public when they shared the Democratic presidential ticket in 1984, and it is safe to say that times have changed. Back then, Mr. Mondale had a strict “hands off” policy and did not even put his palm on Ms. Ferraro’s back when the two stood side-by-side and waved with uplifted arms.

Anything more, and “people were afraid that it would look like, ‘Oh, my God, they’re dating,’ ” Ms. Ferraro recalled in a brief telephone interview on Monday, of what now seems like a political Victorian age.

But the second mixed-sex major-party presidential ticket in American history has nonetheless raised 21st-century questions about etiquette, body language and who hugs first. (Mr. McCain was right to initiate the hugging as Ms. Palin’s hierarchical superior, an etiquette expert said.)

Already, there has been one noticeable shift in protocol: Mr. McCain now introduces his wife first, not Ms. Palin, when both are on stage. But it was not always that way: at his first postconvention rally with Ms. Palin, in Cedarburg, Wis., last Friday, Mr. McCain began by lavishly praising Ms. Palin, who had just rocked the Republican convention. “Isn’t this the most marvelous running mate in the history of this nation?” Mr. McCain asked the roaring crowd, as Mrs. McCain stood quietly by.

It was only after two full minutes of Palin accolades that Mr. McCain finally mentioned his wife and her own speech to the convention. “And I love the job that Cindy did last night,” Mr. McCain said, then swiftly moved to his own remarks.

By the end of the day, in a switch that has stuck, Mrs. McCain started getting top billing: “Could I first introduce to you the woman who gave a great speech last night, the best speech of all, Cindy McCain?” Mr. McCain shouted out to a raucous crowd in Sterling Heights, Mich.

Mr. McCain’s closest adviser, Mark Salter, insisted that there had been no behind-the-scenes stage direction — “Nobody said, ‘Cindy first’ ” — and that no one in the campaign had discussed hugging etiquette or protocol between Mr. McCain and Ms. Palin. “They’re going to behave like normal human beings,” he said. “Nobody ever told him, ‘Just shake hands.’ ”

Nonetheless, etiquette experts weighed in on the hugs, some more approvingly than others.

“He’s hugging her to show the world that he’s all for her, and protecting her, but she doesn’t need that,” said Letitia Baldrige, the manners authority and former White House social secretary to Jacqueline Kennedy.

As a general rule, Ms. Baldrige recommends a warm, firm handshake between male and female corporate executives and finds embarrassing “all this fake hugging that goes on when people greet each other on television.”

But for Mr. McCain and Ms. Palin, Ms. Baldrige said, “it’s O.K., because we accept anything now.”

Ann Marie Sabath, the founder of At Ease Inc., a business etiquette training firm, deemed the hugging “perfectly fine” and said that once Mr. McCain, the top rooster in the pecking order, started the hugging, Ms. Palin was welcome to initiate a hug with him. “It’s a form of professional endearment,” she said. “Getting closer than two arms’ length when you know the other person says, ‘I respect you, we have a comfort level, we have a professional bond.’ ”

Christine Todd Whitman, the former administrator of the Environmental Protection Agency under President Bush who 15 years ago was the first woman elected as New Jersey’s governor, said that she, for one, had embraced many of her male counterparts, as long as she knew them well. “I gave them lots of hugs and kisses, depending on the governor,” she said. (Tom Ridge of Pennsylvania was one, John Engler of Michigan was another.)

Comfort level is a major factor in hugging protocol. When Senators Barack Obama and Hillary Rodham Clinton made their first joint appearance after their bitter fight for the Democratic nomination, in Unity, N.H., in June, Mr. Obama placed his hand on Mrs. Clinton’s shoulder but held back from a full hug. Still, the two did share a few whispers, and Mr. Obama placed his hand squarely on Mrs. Clinton’s back when the two stood for the classic side-by-side political wave.

So far, the McCain-Palin hugs have been brief and a little stiff, in part because Mr. McCain cannot raise his arms up high because of injuries sustained as a prisoner of war in Vietnam. But Ms. Palin, too, appears to keep a distance.

She “seems to be cognizant that she is wandering into the danger zone,” Christopher Buckley, the novelist and longtime satirist of the ways of Washington, said in an e-mail message, “with the result that as she hugs him, she leans away from him so as to insert some chaste space between them.”

Mr. Buckley added, “As the nuns used to say before school dances, ‘Leave room for the Holy Ghost.’ ”

Posted by Mediawatch at 1:18 AM