The United Nations secretary general has said the world must do more to combat the abuse of women and girls.

Ban Ki-moon spoke as organisations around the world marked the UN's International Day for the Elimination of Violence Against Women.

The UN says at least one in three women will be beaten, coerced into sex or otherwise abused in her lifetime.

It has called on leaders and people around the world to address what it said was a "global pandemic" of abuse.

Women between the ages of 15 and 44 are at greater risk from rape and domestic violence than from cancer, traffic accidents, war and malaria, says the UN.

It says violence against women has been reported in every international or non-international warzone and that half of all women murdered are killed by their current or former partner.

"We need to do more to enforce laws and counter impunity," said Mr Ban, who has his own campaign, UNiTE, to address the issue.

"We need to combat attitudes and behaviours that condone, tolerate, excuse or ignore violence committed against women." 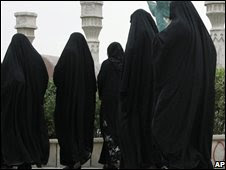 One in three women is likely to be beaten, coerced into sex or abused in her lifetime
One in five women will be a victim of rape or attempted rape
Women make up more than 80% of trafficked people
Up to 130m women have been subjected to genital mutilation (Source: UN)

Worldwide
Organisations around the world are using the UN day to comment on the situation facing women where they are based.

The UK-based development organisation Oxfam is launching a campaign in Kenya, where half of women have reported experiencing domestic violence.

director Carol Thiga told the BBC's Network Africa programme that the group hoped to reduce the social acceptability of violence against women.

Meanwhile, the Cambodian government has warned of an increasing risk of rape and sexual assault against girls and women in the country.

It says that around a quarter of the female population faces domestic violence and that long-held prejudices, combined with new forms of anti-social behaviour such as drug and alcohol abuse, have put young women and girls at particular risk.

In Iraq, women have seen their rights eroded "in all areas of life," according to the UN's special rapporteur on violence against women, Yakin Erturk.

She said the "ongoing conflict, high levels of insecurity, widespread impunity, collapsing economic conditions and rising social conservatism are impacting directly on the daily lives of Iraqi women and placing them under increased vulnerability to all forms of violence within and outside their home".

Ms Erturk said she was also concerned about the rise of so-called "honour killings" of women by family members and the number of women apparently committing suicide to escape abuse.

The UN says that the cost of violence against women is "extremely high".

That includes both the direct cost of providing services to abused women and the impact on the economy in lost productivity and in "human pain and suffering".

The UN commended efforts made in some countries to address the issue but says more investment and greater leadership and political will are still needed.

"There is no blanket approach to fighting violence against women," said Mr Ban.

"What works in one country may not lead to desired results in another. Each nation must devise its own strategy."

But he said there was "one universal truth applicable to all countries, cultures and communities; violence against women is never acceptable, never excusable, never tolerable".
Posted by Mediawatch at 5:15 PM