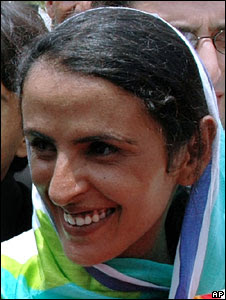 (For first MediaWatch post on this story, link here.)

A Pakistani gang rape victim who won international acclaim as a campaigner for women's rights has married.

Mukhtar Mai wed a policeman who is still married to another woman. He threatened to divorce his first wife if she did not marry him.

Ms Mai said she decided to do so to avoid family break-up.

Four men raped Ms Mai as punishment after her 12-year-old brother was accused of adultery in 2002, but she fought to have her attackers convicted.

She ignored taboos about her ordeal, becoming a champion for women's rights.

Six men arrested and sentenced to death in connection with the gang rape are still in custody pending a retrial.

Ms Mai had said she was not sure she would ever marry, but on Sunday wed police constable Nasir Abbas Gabol in Muzaffargarh district, near Multan in Punjab province.

"When you get married, you have to have faith in your partner and his family. I will try to cooperate with them," she told Associated Press.

"You know, I never said that I would not marry, I said that these things - relationships - are in the hands of Allah. I said if I got a good man I would get married.

"Now, as I thought fit, and with the agreement of my parents and other people, I've got married."

Mukhtar Mai is one of two wives of constable Nasir Abbas. The marriage was solemnised at a simple ceremony in her village, Mirwala.

She first met Nasir Abbas when he was posted at the police station in the village after her gang rape in 2002.

"Eighteen months ago, he sent his parents to ask me if I would marry him. I declined because I knew he was already married and I didn't want to ruin his first wife's life," Mukhtar Mai told the BBC Urdu service.

Nasir Abbas did not take his rejection well and "threatened to divorce his first wife. He also tried to commit suicide", Mukhtar Mai says. 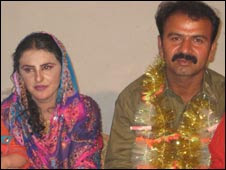 His sisters are married into his first wife's family - and in a tit-for-tat move they were threatened with divorce too if Nasir Abbas divorced his first wife.

Nasir Abbas's first wife and his two sisters approached Mukhtar Mai and pleaded with her to marry Nasir Abbas.

"So I married him on humanitarian grounds. I didn't want three families breaking up because of me," she says.

Mukhtar Mai won widespread international support when she spoke out after being raped - allegedly on the order of a village council.

She has also written a best-selling autobiography and opened a school and a chain of women's crisis centres in Pakistan.

In 2005, she was honoured as Woman of the Year by Glamour magazine in a ceremony in Washington.

The award praised Ms Mai for "her incredible courage and optimism in the face of terrible violence".

Critics of Pakistan's judicial system and social systems say the Mukhtar Mai case is an example of appalling treatment often handed out to women, particularly in feudal, rural areas.

Her rape was allegedly ordered by a village council as a punishment for a misdemeanour blamed on her brother.
Posted by Mediawatch at 10:12 PM